The Zellweger Effect: Judgement and Hypocrisy in the media.

Did you hear? Rene’e Zellweger had plastic surgery! Alert the media! Everyone is talking about it — and by everyone I mean the pundits, bloggers, celebrities and even some of my friends. CNN, The Today Show and most all of the news and entertainment outlets have devoted entire segments to the “news” about her surgery. No one seems to know what to make of the actresses new look, which is why I decided to share some insights on the matter.

The chatter started after the Academy Award winner walked the red carpet and was barely recognizable. Some pundits even questioned whether it truly was the actress we have grown to know and love. I loved her in Jerry Maguire (who didn’t?). She was also adorable and fresh-faced in the Bridget Jones franchise, and yes, she does look different, or should I say “done”. To my mind, this media maelstrom is a classic case of ‘man bites dog.’ This is a concept taught in journalism classes to help wanna-be reporters sharpen their news radar. Dogs bite people all the time. But when a man bites a dog– well, stop the presses.. that’s news! 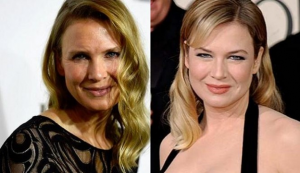 We don’t notice good plastic surgery, but it’s all around us. It’s natural, it’s subtle and people look better and brighter, and maybe even younger or more like their younger selves. Simply stated, they blend. Most of my patients these days have reasonable goals. They are not interested in looking like a different person. Take talk show host and comedienne Rosie O’Donnell, who stated on today’s View, during a discussion about Zellweger’s appearance no less, that she had her eyelids done to correct drooping. She looks amazing and can likely see a whole lot better too, but no one would ever know why. The fact that Zellweger is getting so much attention speaks to the fact that there is so much great work out there that perceived extreme plastic surgery is news. There’s another psychological feature that is rarely discussed about extreme plastic surgery. Some people want to look done. A respected plastic surgeon said this desire is akin to driving a Mercedes Benz. The more “done” you look, the richer people think you are. Most of my patients in Louisville, Kentucky don’t have those aspirations. They just want to look refreshed and a bit younger, but don’t really want anyone to know they’ve had “work” done.

Now I can’t be sure what Zellwegger had done, why she did it or who did it, but bashing plastic surgeons, the actress, or plastic surgery in general is too easy. And it’s beside the point. So too is blaming society for Zellweger’s changed appearance. We can’t on the one hand complain that she made her choices in response to societal pressure on women to look younger and wrinkle-free and at the same time answer survey questions on CNN to weigh in on whether we think she looks good or bad. We also deride male celebrities who we think look overdone or feminized (think Bruce Jenner) based on society’s masculine ideal, and that’s just as judgmental. The bottom line is that Zellweger says she is content with her new look. And that’s the only thing that matters. She told People magazine in a statement. “I’m glad folks think I look different! I’m living a different, happy, more fulfilling life, and I’m thrilled that perhaps it shows.” She continued: “People don’t know me in my 40s. Perhaps I look different. Who doesn’t as they get older?! Ha. But I am different. I’m happy.” Either way the girl I loved in her early movies is gone. Now it’s time to leave the woman alone and let her live her life the way she chooses.